NASA and the RSPBA may not have the same goals 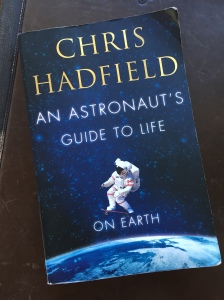 , but their members both have a lot in common. I recently read An Astronaut’s Guide to Life on Earth, by Chris Hadfield – the famous Canadian astronaut who sang Bowie’s Space Oddity that went viral on youtube. The book was enlightening and inspiring – I really love this type of book – I’ve never been a major sci-fi fan. His story was one of sheer determination and passion, with long-term gain as his major short-term focus.

As a musician I was able to relate a lot of his thoughts and philosophies to the struggles that we face throughout our music career’s.  It’s not as simple as, I’m going to learn to drum and then in one year I will reach my peak and perform on a stage in front of 10,000 people. Picking up an instrument is a life changing decision, that can shape your thinking, your lifestyle and your direction.  Once you pick it up, you are making a commitment to dedicate your life to discovering the instrument’s possibilities and constantly challenging your personal ability. There is a never a final destination for a musician, it’s an ongoing journey of learning and developing.

Who doesn’t enjoy rudiment practice? One hour each day, for a year, on drags. 500 tachums each day for six months. 1 hour of GDE’s for two years. That should be music to our ears (pardon the pun) as musicians – the practice of simple tasks over and over again, so that we develop strong form and correct technique. But most of us would cringe at the thought of practicing menial tasks over and over – particularly those who are new to learning an instrument.  When we need it most (performing or competing under pressure) we will be thankful we have performed these mundane tasks over and over again. During these tasks, day-in day-out, it is so important that our mind is focused on the reason that we are practicing these simple and repetitive patterns. If we don’t have a long-term tangible goal – then why would we be motivated to actually perform these rudiments repetitively?

The journey to becoming an astronaut (particularly for a Canadian as they don’t have their own launch pad) is one which is very difficult and next to impossible.  The selection process is incredibly difficult, the intelligence requirements are extremely high, the physical demand is huge and the emotional drain is never-ending.

From a very young age Chris talks of wanting to become an Astronaut. Everything, from the age of 10, was working towards his final goal. Every sport he took, every book he read, every question he asked his elders – every single moment was dedicated to his goal of one day, becoming an Astronaut. He was not going to get an instant gratification – this goal wouldn’t come to fruition for many years – and he was perfectly comfortable knowing that it may never come true. It was the pursuit of an overriding goal that drove him. That overriding goal shaped his decisions and his life, all for the better. Had he not become an astronaut, he still would have achieved many great feats in his career.

For us pipers, drummers and other musicians – we need to be comfortable and happy knowing that we will never truly reach our end goal. We may have lots of personal victories along the way, but once we have achieved those goals, we then need to re-focus and re-calibrate. If every person quit performing once they had won their national or world title – it would be a sad world for musicians.

Set yourself a long-term goal, get down to some tedious rudiment development and enjoy the small successes along the way. Get out there and perform for the public. That’s what music is all about. Performing.

A little gem from Chris Hadfield :

“We can’t always control what happens to us in life when big moments come around. But we can control how prepared we are. It might seem obvious to prepare if you’re planning to pilot a Soyuz rocket to the International Space Station, but many of us fail to prepare for normal stuff in life – even if we know there are big moments are coming up.

So whether it’s a big exam, a job interview or sports final, when the high-stakes situations arise planning for success is key. In most scenarios you’ve passed or failed before you even begin, depending on your level of preparation.”

Chris Hadfield’s book is a must-read for sports-people, musicians, leaders, business-people and humans who want to lead a greater life. You can get it at most major book stores worldwide – or head to Amazon.

One thought on “What can pipers and drummers learn from an Astronaut?”